IAS was pleased to be the inaugural sponsor of the Art Handlers Prize at the recent National Photographic Portrait Prize exhibited at the National Portrait Gallery of Australia.

The 2016 winner was Mathew Newton who’s image of Racheal Alderman and her Albatross had been a long term project that he had been working on.

Mathew says that the project was conceived as an initial flagship program to launch the Tasmanian Albatross Fund. One of the key aims of the project was to show how art can be a powerful tool in securing philanthropic funds to support conservation and community initiatives and drive awareness and social change.

“The award that you supported has had the effect of generating a considerable amount of media interested in the image and the project which will ultimately help the ongoing conservation of the albatross. I just wanted to thank IAS for your support of the NPPP” 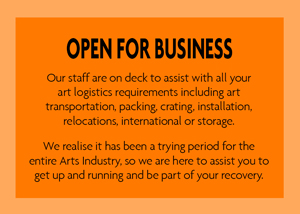 For more information please visit our Open for Business page.